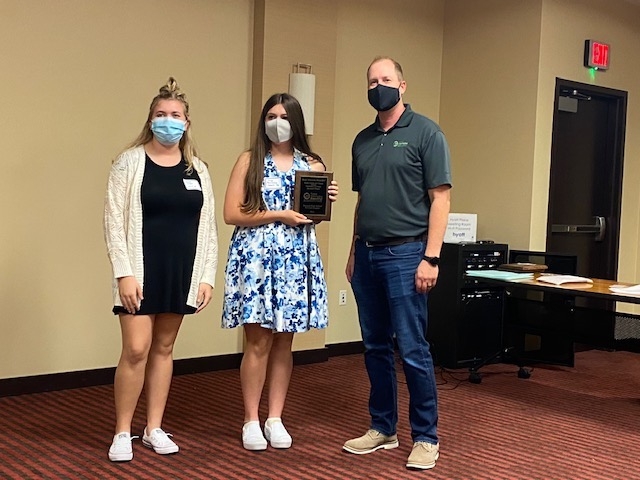 Metschke collected and recycled over 500 Tee Shirts and donated them to the York Living Word Mission in conjunction with her FCCLA STAR Project.  Members Hannah Kolterman-Wagner and Miriam Vohel participated with a FCCLA STAR project promoting Environmental Awareness-collecting funds to save the Rain Forest, worked with Congressional Jeff Fortenberry and his environmental programs. They volunteered to assist in the Community Clean-promoting the recycling of scrap metal and appliances, assisted with others at the local Community Recycling Center-recycling paper, magazines and plastics.  They raised funds through a end of the year coin drive to assist with Global Warming by collecting funds for the Rainforest Alliance to help the Amazon Rain Forest and planted seedlings and placing them in the SHS Green House to be re-planted in the county in the spring.

They also offered support US House of Representatives Jeff Fortenberry’s Bill HR 3100 (116) a co-sponsored bill –“The Challenges and Prizes for Climate Act” (HR3100-116)   a very creative approach to assist towards the issue of global warming and climate change with a five division competition to seek the best was to improve the climate.  We especially like the contest’s point number 4. CLIMATE RESILIENCY.—Solutions to provide new or improved approaches to mitigating or adapting to the effects of climate change (such as floods, drought, excessive heat and cold, and severe weather) in rural or urban areas.  We feel this point would assist Nebraska in dealing with floods, drought, and severe weather.

The GFWC Seward Woman’s Club was awarded the First Place Award in the Outstanding Civic Organizations for their efforts to recycle and for beautification.  They were recognized for their annual City Wide Arbor Day event, their recycling of shoes and pop tabs and their annual “Make a Difference” Day.  Accepting the award/plaque was GFWC Member Representative, Bonnie Kruse-who emceed the annual GFWC Arbor Day Program.

Jon Kruse and Dr. Louis Reith accepted the First Runner-Up award in the category of “Clean Community Campaign”-for the efforts with the annual city wide Seward Clean-up- by the SCCDP and the work of the Rotary and Kiwanis with the recycling program, new playground equipment and tree plantings.  The award was presented to the Seward County Chamber and Development Partnership.

Bonnie and Jon Kruse accepted the First Runner-up award for Seward in the category of the Deannie Anderson Award for Over-all General Excellence with the Community Beautification Program and Recycling efforts for communities in the over 5,000 population. Ogallala, Nebraska was named the First Place winner for 2021.

For more information on Keep Nebraska Beautiful contact KNB at 402-486-4562 or write to KNB.org.