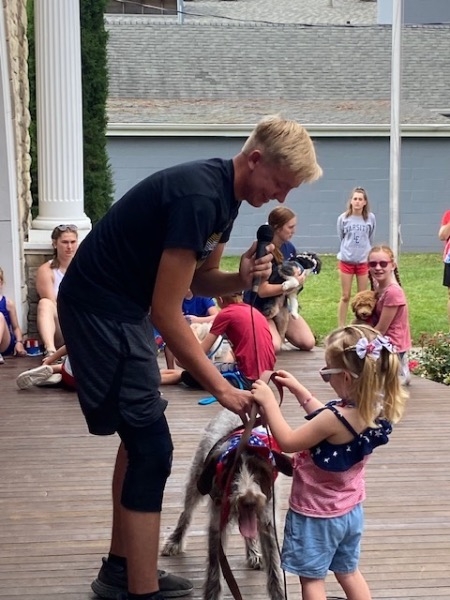 The Seward High Students were very involved with the recent Seward Fourth of July Celebration held July 4, 2022 in Seward. The theme of the day was “Rally Round the Flag” and many students were involved beginning with the 7:30 AM Flag Raising by the Seward Boy Scout Troop 256.  Many of the students in the local troop assisted with the flag raising.

The SHS FBLA co-sponsored the Holiday Home Decorating Contest with the Seward Rotary Club and they hosted and sponsored the Hot Wheel Race for children during 4th at 10:00 AM.

The SHS FCCLA Chapter sponsored the annual Children’s July 4 Bike/Wheel Decorating Contest under the direction of SHS FCCLA Project Chair Julya Metschke.  She served as the Emcee and event coordinator.

SHS FFA leader Crayton Koranda emceed the SHS FFA Pet Contest, sponsored by the SHS FFA.  The FFA students also volunteered to carry many of the parade banners in the Grand Parade at 4:00 as well.

The SHS Marching Band, Flag Corp and Cheer Squad participated in the Grand Parade, leading the delegations of SHS Class Reunion Floats.  The SHS Marching Band is under the direction of Amanda Kenny.  The SHS Band Boosters also hosted their annual Sloppy Joe/Yum Yum Feed on July 4 from 11:00 to 1:30 at the Civic Center.  The Marching Bluejay’s won the “Dorothea Bek Memorial Trophy”-Best Marching or Walking Unit presented by the parade judges following the parade.

Several SHS students presented with musical presentations in the Civic Center in the Auditorium and many SHS Students were part of the Concordia University Summer Choir Concert at 11:00 in the Civic Center Auditorium.  Numerous members of the SHs Band are also members of the local City of Seward Municipal Band and participated in several concerts on July 4 and during the week-end.

SHS students were also involved in the local Seward Trolley Program, serving as “runners” or conductors for the Trolleys on July 4, 2022.

“The many SHS Students that assist us with our local Seward Fourth of July program and festival is exciting,” said Clark Kolterman-longtime July 4 Committee volunteer.  “It is great to see so many involved and working to promote their groups and Seward as well.  It is a wonderful learning experience and creates many good memories-plus it is a fun day!”

The Seward High Family Community Career Leaders of America (SHS FCCLA) sponsored their annual Best Decorated Bike/Wheels contest on July 4, 2022 at the Seward Band shell at 8:30 AM.  The contest was free and open to all young children.

There were a host of awards presented and every child was recognized with a special, engraved medal from the contest.  Serving as Emcee was FCCLA Vice President Julya Metschke.  She introduced  each contestant and quizzed them on their bikes.

Judges for the contest were JJ Metschke of Omaha and Riley Nuttleman of Seward. JJ Metschke announced the winners and the members of the FCCLA handed out the medals to all the participants.

The entries were all invited to participate in the Grand Parade at 4:00 in unit A-13.

The Seward High Future Business Leaders of America Chapter at Seward High sponsored the annual SHS FBLA Hot Wheel Race for young children.  There were three preliminary division races with the first two qualifying for the final grand prize on Jackson Avenue, just north of the Band shell on July 4, 2022!  The contest was free and open to all in the qualifying age groups/divisions.

The top six competed for the finals and the winner of the coveted trophy was Ryler Hotovy-Age 5.

The Hot Wheel Contest was sponsored by the SHS FBLA.  SHS students assisting as co-chair from the SHS FBLA were Jacob DeGroot, Luke Wegman, Rorie Filbert and Brenna McAdam.  They were assist by Jessica Kolterman and Riley Nuttleman of the Seward Fourth of July Celebration Committee.

Named First Place winners this year in the SHS FBLA/Rotary Club Home Decorating Contest for July 4, 2022 were the Keith and Ellen Gardiner Family at 214 Roberts Street for overall “Best Night Time July 4 Display” featuring the “Made in America” and the Terry and Connie Kamprath home at 938 Cherry Lane for the overall “Best Daytime Display” with their “Red, White and Blue Party! “ for July 4, 2022! Both homes and owners will be awarded the First place trophies!

Both homes and businesses were recognized by the committee, as “In the Spirit” for the July 4 celebration in Seward.  Other top finishers in the contest were the home of Jill and Jarod Hochstein at 357 Star Street-winning the “Spirit Award” and the historic Gilbert and Marie Blomenberg home at 345 North Second Street winning the “Patriotic” award along with the “President’s Award” presented to the Dave and Amber Fiala Historic Home at 411 Columbia Avenue! Other lighted entries that were outstanding was the lighted and decorated home of the Gene Mayfield Family at 208 Third Street, along with the Mel and Clarice Bolte home at 712 Hillcrest Drive-both were outstanding!   The top two first place homes will receive a special trophy to recognize their efforts and thank them for their leadership in promoting and helping to make Seward a “red, white and blue” community-however all of the decorated homes are appreciated and fun to enjoy.

The contest was sponsored by the Seward Rotary Club and assisted by the Seward High FBLA (Future Business Leaders of America).  Judges were members of both clubs, with co-chair being Ken Schmieding for the Rotary Club-assisted by Clark Kolterman and FBLA Club Leaders Eli Hiser, Jacob DeGroot, Luke Wegman and Kretyn Roth served as the Quad-chairmen for SHS FBLA.  A van of dedicated club members judged the nominated homes on Sunday evening June 26, 2022!  The judging may appear early but the committee wanted to announce the awards in the Seward County Independent prior to the Fourth, so individuals could “check out the homes for themselves!” stated Eli Hiser, FBLA Representative.

“It is wonderful to see so many homes in Seward have taken on the Fourth of July excitement and the Rotary and SHS FBLA is honored to recognize and thank all of the families who took time to create a fun outdoor “red, white and blue” theme for the community to enjoy!  What great community spirit-Rotary thanks, salutes and honors all of the nominees! “Stated the new Seward Rotary Club President Dr. Matt Dominy. “Our winners were all nominated and to be sure the home was judged, it is good to give the committee a nomination, so we don’t miss them!”

The Seward High FFA Chapter again sponsored the local Pet Parade/Pet Contest on July 4 at the Seward Bandshell.  Local SHS leader, Crayton Koranda served as the emcee, with other FFA Chapter leaders serving as the hosts and judges for the many children involved with their pets.

Every child was awarded a title-such as “Smallest Pet” or “Best Decorated Master/Pet” or “Cutest Pet.” A special, engraved medal on a red, white and blue ribbon was presented to each contestant in the contest.  The contest was free and open to the public.