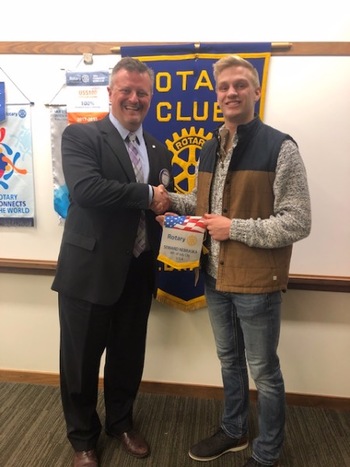 Benjamin Myers is honored as Youth Rotarian of the Month

The February  Youth Rotarian of the Month is Ben Myers, a senior at Seward High School and he was honored on Wednesday, February 5 at noon at the Jones Bank auditorium at the Rotary weekly luncheon meeting.  He is the son of Nate and Heather Myers of Seward.

He has been part of the SHS Basketball program his entire high school career and serves as a leader on their team this year.  He is a basketball letterman, but had to miss the last two seasons due to shoulder surgery.

He was a leader in the SHS Swing choir for two years, as well as the Select choir for three years. He participated in the VFW “Voice of Democracy” oratorical program and was a local finalist and qualified for the District VFW contest. He was also a participant in the State Fair Education contests, participating in the poetry, essay and penmanship contests.

Ben served as an Outdoor Education Counselor for two years, selected by teacher nomination and also was a mentor for the Junior Jays Seward Elementary program.    He was selected by the SHS Faculty to attend the annual Nebraska Coaches Leadership Summit representing Seward.  He has been an involved leader with the SHS Future Business Leaders of America (FBLA) for the last two years.

He is an active member of the Hillcrest Evangelical Church in Seward, a member of their youth group and often serves as a voice of youth for the congregation, as well as one of the lead youth volunteers at their Vacation Bible School program for the last four years.

His work experience has included summers with Pioneer Detasseling and Rouging in Seward.  He was the crew leader for 18 students and the organizer to work in the fields with his crew.  He also worked for the Blue Valley Umpire Association, as an Umpire for youth baseball and softball.

In the area of “Service Above Self” community service, he enjoys participating in a host of community activities through his church youth group and was involved in the Hillcrest Evangelical Church Bible School program as an assistant for many years.  He serves as a Student Summer Camp for both Football and Basketball for the last four years of high school.

The SHS Academic Decathlon Team took off for Bellevue East High on one of the coldest mornings of the season, to finish the last phase of the Regional Academic Decathlon contest and compete in a Regional Super Quiz Bowl event.  They were presented the results of the six previous “on-line” tests, taken on Monday, January 13th at the SHS Media Center by all ten team members.

The SHS Academic Decathlon Team competed in their final round of the annual Academic Decathlon Regional contest at Bellevue East High School on Saturday, January 18 for an all morning Super Quiz Bowl event academic competition.  Seven of the ten SHS Senior class students traveled to Omaha, where six students of the SHS AD team were selected to compete in a Super Quiz Bowl finale.  The students competed with other students from similar size schools in competition against students with their same grade point averages-with two students competing at one time together.

Awards and results from the six tests previously taken on January 13th, 2020 in Seward and they were announced at Bellevue East.  Medals were award to both the Team members and Alternate Team members in each category.  The SHS Team won 28 medals in the “on-line” testing competition!

Noelle Baker was the sponsor/coach on Saturday at Bellevue and serves as the SHS Academic Decathlon coordinator/coach for 2020.  Seward Optimist Club members Clark Kolterman, Lana Urban and Monica Brum served as the team proctors for the online testing previously at Seward High, with SHS I T Director Craig Williams serving as the Quiz Master.

The students were previously given six tests online and had 30 minutes to complete each test on Monday, January 13th at SHS.    The tests included topics of Art, Literature, Music, Math, Economics and Science.  The literature test featured questions on the novel Frankenstein: The 1818 Text by Mary Shelley, with the Introduction by Charlotte Gordan.

This is the 22nd year that SHS has competed in the Academic Decathlon team contest.  It is funded by the School District of Seward High Ability Learner Program (HAL) and the Seward Optimist Club.  The Seward Optimist Club also donated matching tee shirts for each of the team members and members served as proctors for the on-line tests at Seward High.