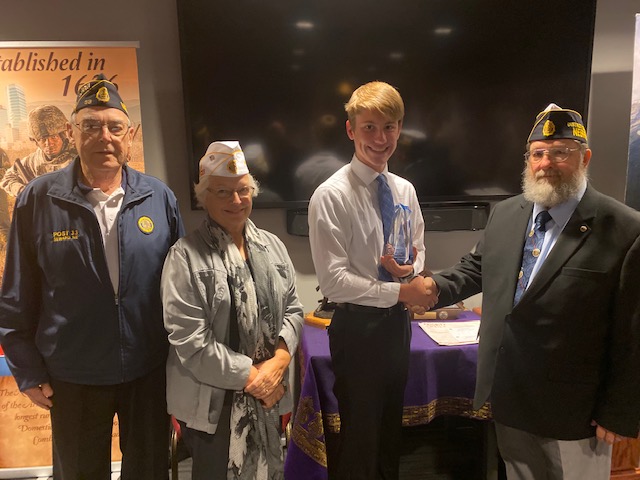 Seward High Junior, J. J. Metschke was declared the winner in the recent American Legion District 12 Oratorical contest at the Nebraska National Guard Museum on Sunday, November 03, 2019 at 2:00 pm and was held in the museum’s Jones Bank Theater .  He is the son of Jonathan and Amy Metschke of rural Seward.  The contest required J. J. to present a ten minute, memorized speech on some aspect of the US Constitution and then draw one of four US Constitution Amendments and speak extemporaneously on that amendment for three to five minutes.

J. J.’s speech on the constitution was title “America’s Favorite Pastime” and he compared the US Constitution and Amendments to the game of baseball.  He drew Amendment #24 on the elimination of the poll tax and other election required taxes and spoke on the history of the amendment, impact of the change and again used the analogy of baseball.  The other amendments offered in the draw were Amendment 12, 20 and 27.

Judges for the oratorical contest included US Veteran Greg Holloway of Bee, NE, Concordia University Senior-Wyatt Woodman of Kenesaw, NE- a history and museum studies student and Anna Downing of Ulysses-speech judge and longtime promoter of the American Legion Oratorical program.  Noah Fields served as the official timer for the contest.  Gerry Meyer, Executive Director of the Nebraska National Guard Museum served as the location host for the speech contest.  Refreshments followed the competition in the John Cattle Memorial Room at the museum

J.J. Metschke now advances to the Nebraska American Legion Area C oratorical contest to be held at the Seward Civic Center on Sunday evening, December 1, 2019 at 7:00 in the original building-in the Seward Woman’s Club room/the West Fireplace Room. The winner at the Area C contest will advance to the State American Legion Contest in January of 2020.  The students are asked to do exactly the same activity- a ten minute, memorized speech on the US Constitution and then speak on one of four US Constitution Amendments 12, 20, 24 or 27.