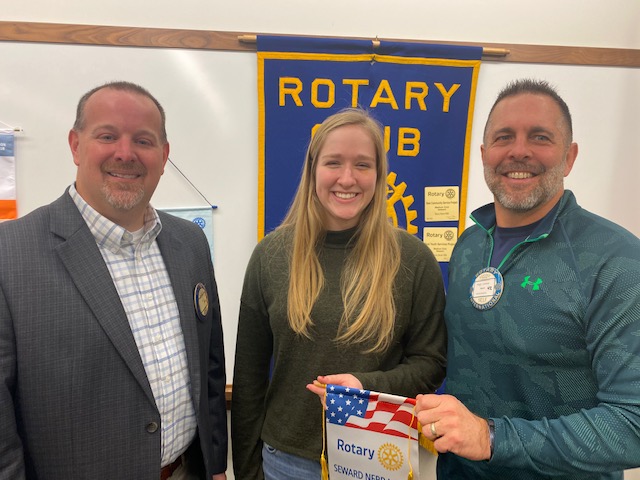 Addison Smith, an Seward High Senior, was selected the December Youth Rotarian of the Month and recognized and honored at the recent Seward Rotary Club noon luncheon meeting on Wednesday, December 11th, 2019 at the Jones Bank Auditorium.  Addison Smith is the daughter of Devin and Michelle Smith.  She was introduced by Rotarian Matt Dominy of the Seward Rotary Youth Rotarian Committee and she was presented a Rotary Club banner and information on Rotary and Rotary International.

Addison is very involved with a host of extracurricular activities at Seward High, she is also a lead scholar at Seward High!  She is always on the SHS Academic Honor Roll and a longtime leader in the SHS National Honor Society with a current 4.0 GPA.  She was also selected an Outdoor Education Counselor for many years.

Addison is one of the very rare three sport athletes at SHS.  She is a longtime leader and team captain for the very successful SHS Volleyball team-involved in the program for all four years of her high school career and awarded a varsity letter.  She has also been involved with the SHS Woman’s Basketball program, awarded a varsity letter, and a member of the Unity Council.  She is also one of the senior leaders on the highly awarded Woman’s Track program at SHS in the events of 100 meter hurdles and 300 meter hurdles and looks forward to her senior track year.

She participated in the VFW Voice of Democracy Speech Contest.  She has been involved over the years in a host of activities at the Nebraska State Fair in the Education Division.

Addison is also a very involved SHS leader in the SHS FCA (Fellowship of Christian Athletes) program and a mentor with the Jr. Jay’s Mentoring program-working with students in grades Three and Four at the Seward Elementary school.

Addison has been employed as a Seward Recreation Basketball Coach, a member of “Team Elite Detasseling” in Seward every summer –managing crop purity and is currently employed as a childcaregiver for several families in Seward

In the area of “Service Above Self,” Addison has been a volunteer mentor at the Seward Elementary, as well as in the area of mentoring youth in the local basketball and volleyball summer programs.

Addison is a member of the St. John Lutheran Church in Seward, an active member of their Godparent program, attended the National Youth gathering in Minneapolis this last year and the National Youth Gathering in New Orleans in 2016.  She was a longtime volunteer in the St. John Lutheran Church Vacation Bible School.  She is considered a strong voice of the youth in her congregation.

Addison has wanted to attend Concordia University since she was in Third Grade at St. John Lutheran School.  She has signed a letter of intent to play volleyball with the Concordia University Volleyball team next year and is pursuing a career in the area of education, hoping to eventually become a Middle School teacher.