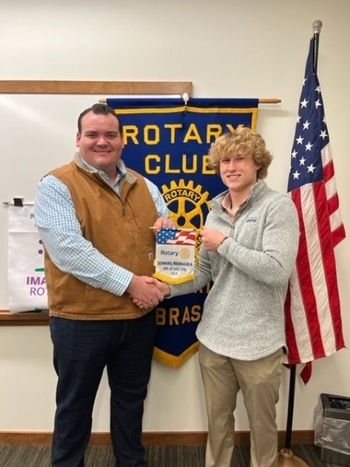 The Seward Rotary Club named Kalen Knott the January Youth Rotarian and recognized him at their January 18thClub luncheon meeting at the Jones Bank Auditorium in Seward.  He is the oldest son of parents Nate and Mindy Knott of rural Seward. He was introduced by Rotarian Anita Foor.

Kalen is one of the many strong student athletes at Seward High. He consistently has his name on the SHS Honor Roll and is and has been enrolled in many college credit classes while in high school through both Southeast Community College and Concordia University.  He has been a longtime member of the SHS Bluejay Leadership Team (Student Council) and serves as the Class President for his high school class.

Kalen is an outstanding athlete in almost all types of sports, however his passion is for Football and Track and Field at SHS.  He was the SHS Football Quarterback this fall, and he has played a variety of positions and lettered three years at SHS in football.  As the quarterback this year, he led the SHS Bluejays Football team to the playoffs, with a successful winning season.  He was named All State in Football and has many Central Conference Honors as well.

In Track and Field, Kalen has earned a Varsity Letter for the last three years in the pole vault competition, winning numerous awards all season, winning First Place at his District Contest and eventually was named the Third Place Medalist at the Nebraska State Track and Field contest the last two years, and was an Academic All State in Track last year. He won many Central Conference Honors as well.     He plans to compete in Track and Field- in pole vault at the college level next year.

Kalen enjoys his art classes and won the First Place Award and scholarship at the Nebraska State Fair last year for his pen and ink drawing in the Nebraska State Fair Education Division competition.  He is presently in a portfolio art class at SHS, learning the art of making flies for the fly fishing, and has created a large display of the beautiful hooks, baited for the big trout in Colorado.

This versatile young man has been a longtime member of the SHS Show Choir for four years and is one of the senior leaders in the SHS Show Choir (Swing Choir).  The group has earned numerous awards and honors during his years of membership.  He is also been in the Select choir for many years, as well as the Honor choir.

Kalen is one of the top seniors in the local, SHS Future Business Leaders of America Chapters (FBLA) and qualified to represent the Chapter at the state convention in the area of “Stocks and Bonds” competition.  He is a loyal member of the SHS Skills USA Chapter as well and qualified and won the State First and Third Place Medal at the State Skills USA Conference in the area of Mouse Trap Competition at the state Skills USA Conference.

He has been a longtime employee for the Sloup/Thorell Detasselling program every summer and this last year became an associate with the “College Hunks” Moving Company in Lincoln.

He is an avid golfer and loves to play golf with his buddies whenever the opportunity arises.

Kalen has committed to Bryant University in Rhode Island to compete in track and currently plans to major in business marketing, but he said that may change by the end of the first school year.

Kalen was introduced and presented with a bag of Rotary Club mementos and information, as well as a Seward Rotary Club banner for his graduation table.  He is now a finalist for the Youth Rotarian of the Year and will be recognized at the annual SHS Honors Night in May with the other Youth Rotarians.

Rotary’s Youth Rotarian applications are found in the SHS Counselor’s website and are awarded one per month of the school year.  Contact Noelle Baker for more information on the program.