Today
A 50 percent chance of showers and thunderstorms, mainly before 11am. Mostly cloudy, with a high near 72. North wind 6 to 15 mph, with gusts as high as 22 mph. New rainfall amounts between a tenth and quarter of an inch, except higher amounts possible in thunderstorms.
Tonight
Partly cloudy, with a low around 57. Northeast wind 3 to 8 mph.
Saturday
Mostly cloudy through mid morning, then gradual clearing, with a high near 83. South wind 5 to 13 mph.
Weather forecast provided by weather.gov.
Search 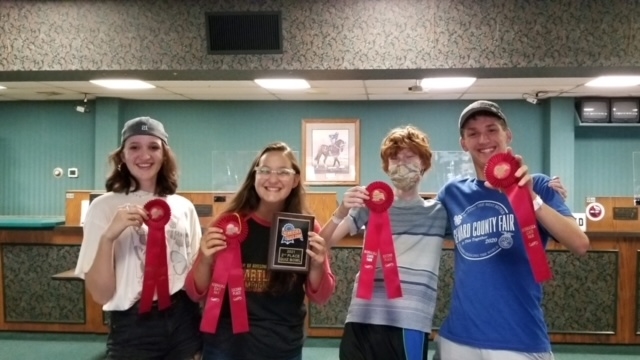 Seward High sent four Quiz Bowl teams to the 2021 Nebraska State Fair Quiz Bowl contests on August 28 and 29 at the Bosselman Conference Center-competing against other schools from across Nebraska in the first General Knowledge Quiz Bowl Contest for the new school year. The SHS High School Freshman team placed First Over-all in their contest on August 28th.

Members of the SHS Freshman Quiz Bowl team were Dalton Mobley, Ben Nottingham and Abigayil Wunderlich.  They received a $100 scholarship each, plaque, rosette and tee shirt.

SHS had three teams in the High School Division and they place Second Place and Third Place in their Division.  Placing second was the SHS Team of Madison Kramer, Elianah Wunderlich, Sjoen Munk and Evett Howe. They each won a $50 scholarship and a plaque and tee shirts.  Lincoln East High School won the overall Championship.

Placing third at the tourney was the SHS team of Jacob Mueller, Noah Fields, Maddie Viger, Sam Schroeder.  They each won $25 and free tee shirts.

The other SHS Quiz Bowl team competing was Natalie Axt, Krystyn Harris, Julya Metschke and Taylor Hostert.  The SHS Quiz Bowl Coach is SHS Educator Melissa Pohl-English/History, who was the sponsor both days.  Melissa Pohl of Utica and Dr. Louis Reith of Seward served as volunteer readers at the Quiz Bowl contests.

The contest was a General Knowledge Quiz Bowl –with questions centering around Math, Science, History, Music, Language Arts and other areas as well. The contest was sponsored by the Nebraska State Fair and the NEBRASKAland Foundation, with all contestants also given a free pass to the State Fair.