Tonight
Increasing clouds, with a low around 22. East wind 6 to 8 mph.
Thursday
Snow and freezing rain before noon, then rain or freezing rain between noon and 2pm, then rain after 2pm. High near 35. East wind 6 to 9 mph. Chance of precipitation is 90%. New ice accumulation of 0.1 to 0.3 of an inch possible. New snow accumulation of less than a half inch possible.
Thursday Night
A slight chance of rain or freezing drizzle before 10pm, then a slight chance of rain or freezing rain between 10pm and midnight. Mostly cloudy, with a low around 26. Light and variable wind becoming northwest 6 to 11 mph in the evening. Winds could gust as high as 16 mph. Chance of precipitation is 20%.
Weather forecast provided by weather.gov.
Search 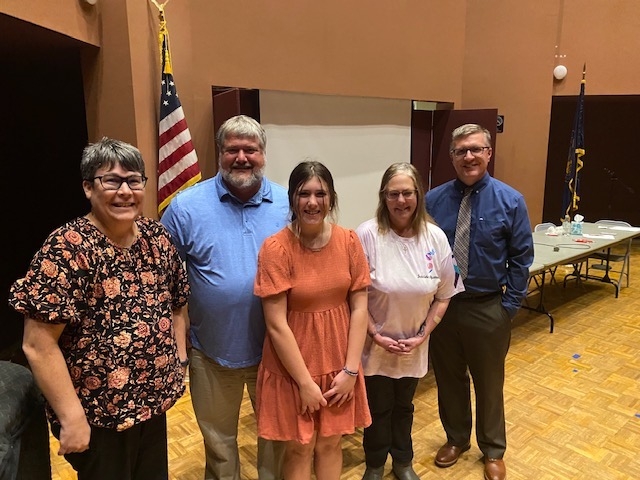 A special panel created for September’s Suicide Awareness Month was presented on Wednesday, September 29th, 2021 at the Seward Civic Center’s Langworthy Auditorium at 7:00 pm.  The event was held to assist the area in suicide awareness and offer ideas to assist with prevention of suicide.  The event was co-sponsored by the Seward High FCCLA, The GFWC Seward Woman’s Club and the Seward County CASA program  The event was free and open to the public with a special invite geared to area teens.

The presentation opened with a welcome from Julya Metschke, who thanked the audience for attending and introducing the panel.  She distributed cards to the audience, where they could write questions for the panel.

The presentations began with Dr. Dave Miers speaking on the topic of “Suicide Prevention and Community Connectedness” in the form of a power point presentation.  Dr. Miers spoke on the value of being connected and touched on several, incidents of suicide he personally had to deal with recently.

“Suicide can touch anyone-but it is preventable,” he commented.  “Resources can help prevent suicides from happening and those that are more connected are less likely to act out and commit suicide.  Seward is a special place, one of my favorite places and even those very special places are not immune to the tragedy of suicides.”

Mier’s research and studies over the decades first focused on the value of “connectedness” and how it affects suicides.  More recently he has studied the impact of suicide with families and the ways they deal with suicide.  His goal is to bring that new knowledge achieved to share with others.

He showed a short video from ProjectRelate.org on the issue of Mental Illness.  Miers stated that “Mental illness is as important as physical health, and it is ironical that we rarely ignore our physical health issues but when it comes to mental health, many are slow to react to solutions or get help.”

The video elaborated on the mental illness of Depression-defined it and shared examples of symptoms of depression.

One solution to the “call for help” was the video titled “Ask A Question –and Save a Life,” which featured Dr. Miers and actual families and friends that had to deal with suicide issues.  The video offered “Help, Hope and Healing.”  It offered advice on how to help people who “call out,” offering statistics, facts and strong personal testimony, along with the 1-800-273-TALK-the suicide hotline.  Miers felt the big take away from the video was to simply “Talk” and work out the issues with the person who wants to commit suicide.  The video can be found on U-tube.

He stressed “Protection Against Suicide” and elaborated on Suicide Protective Factors such as getting help for mental, physical and substance abuse, restricting access to lethal devices such as guns, building family support, and he encouraged establishing strong relationships with a doctor, pastor, teacher or counselor-connecting to the community in some manner.

Following Dr. Mier’s presentation, Julya introduced Anna Downing, the mother of the late Thomas Bosmenial, who committed suicide three years ago as a college freshman at UNL.  She shared her story of losing Thomas and pointed out that she represented the family aspect on this panel and that “No parent should ever have to bury a child!”

She stressed the value of communication and to find someone to talk to if you are considering harming yourself.  She requested the students to consider the people left behind who are left to “pick up the pieces” following a suicide.  Mrs Downing asked everyone not to let their loved ones go through the suffering of a parent whose child committed suicide.

Counselor Jon Metschke of Metschke Counseling Service in Seward was then introduced to share his experiences with clients who request help.   He did stress that any child that he works with on any issue must have parental consent.  He did stress that he has worked with many in the Greater Seward Area that have considered suicide and he is concerned.  “Suicide does happen in Seward and there is a concern in Seward that “all ages” are dealing with the issue of suicide.”

Metschke felt that one possible  root of the problem is that many of his young clients have too much time on their hands and turn to social media to the point that it almost has become addictive.  Social media assists in developing low self-esteem and depression, as the viewer is not as perfect as the social media demonstrates by others.  He reminded the audience that with suicide “There are no takebacks-- Suicide is so very final!”  He pointed out there is “Help and Hope” by talking to a friend, family member, teacher, pastor or another loved one.

Questions that were written on notecards followed that were addressed to the panel-and coordinated by Julya Metschke.

Julya Metschke offered special thanks to the panelists - Dr. Dave Miers, Jon Metschke, Anna Downing and the local civic sponsors The SHS FCCLA, Seward County CASA, and The GFWC Seward Woman’s Club. She also thanked the local GFWC Seward Woman’s Club for the evening’s refreshments.  She acknowledged and thank the SHS Video Class for the equipment to record the evening’s presentation and volunteer Riley Nuttleman who filmed the presentation.  Special thanks were extended to Erin Wiseman and the Seward Civic Center for the facility and the Seward County Independent for the articles promoting this panel presentation. Printed Suicide Awareness and Prevention materials were available in the lobby of the Civic Center.

After the conclusion, refreshments were sponsored by the GFWC Seward Woman’s Club and more conversation continued on the topic.