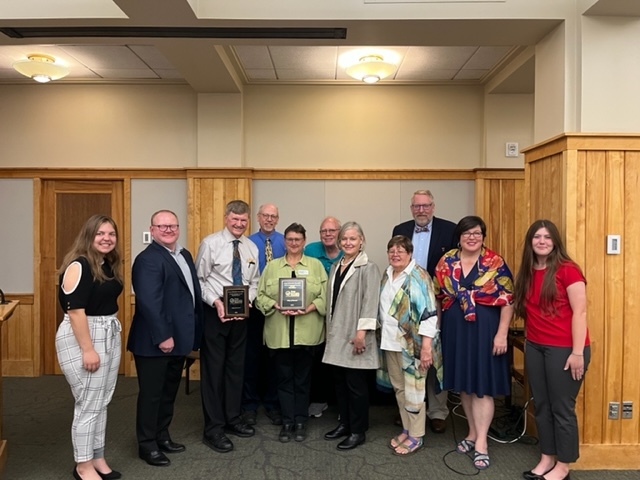 The annual Seward County Chamber Development Partnership’s (SCCDP) Spring of 2022 “City Wide Clean-Up Day” won first place in the statewide “Keep Nebraska Beautiful” Great American Clean-up competition at the 2022 “Keep Nebraska Beautiful” Conference in Nebraska City at the Lied Conference Center. The award was presented at their annual awards dinner and accepted by SCCDP representative Donna Hendrickson.  The SCCDP co-sponsors and coordinates the annual community recycle day in the spring every year, working with a host of civic groups and businesses to “clean up” the community and rid the community of waste and unwanted materials.  The application for the KNB award was prepared by Jean Kolterman-local Chair of the “Keep Seward Beautiful” program and her committee.

The City of Seward also was named First Runner-Up in the annual “Deanie Anderson” Keep Nebraska Beautiful Award for their overall beautification and recycling efforts in the community.   The award was based on the Community of Seward’s outstanding cooperative efforts towards recycling, the new parks and recreation programs, the creative and successful Downtown Restoration and Redevelopment and the overall spirit of volunteerism and work to assist in the “Keep Seward Beautiful” programing.  South Souix City, Nebraska was named first place for the Anderson award.  The application was prepared by Jean Kolterman-local Chair of the “Keep Seward Beautiful” program and her committee.

“The First Place award for the annual Clean-Up day is most deserved,” stated Jean Kolterman of the Keep Seward Beautiful Committee.  “The SCCDP and area groups work very hard to have a successful clean-up event every year after year.   This clean-up effort and event allows the community to clean-up and remove a wide variety of “eye-sores” in town and make Seward a better place to live. The work of the SCCDP and those involved for this “Clean-up” are to be commended for their organized program.  The SCCDP is most deserving of this honor and First Place award” and we did not want them to go unnoticed for all their hard work and wanted to thank them, that is why we nominated them.”