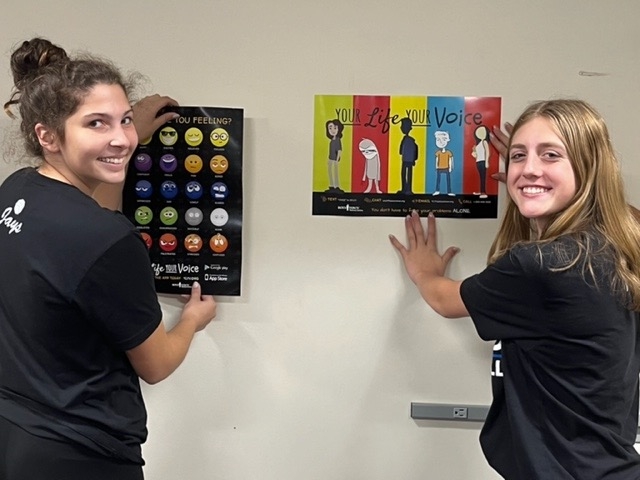 The Seward High Family Career Community Leaders of America (FCCLA) served as the coordinator of the Seward High Suicide Awareness and Prevention Week at the high school the week of September 24th  Teen suicide awareness is a major project of the National Programs for FCCLA and the local SHS FCCLA wanted to focus on the issue this year.  The event was coordinated by FCCLA members Tina Marroquin and Ayda Metschke.

The week featured daily public announcements in the morning, were they presented on statistics and awareness of Teen Suicide and messages were also placed in the daily bulletin.  Posters on Suicide Awareness and Prevention were furnished by Byran West Hospital, Dr. David Miers and the Boys Town Hotline.

Larger posters on Suicide Awareness and Prevention were furnished by Bryan West and Boys Town Hotline.  The posters were placed throughout the school by the FCCLA membership.

“We were glad we could promote awareness and prevention on Teen Suicide at the high school level” stated FCCLA member Molly Marroquin.  “No lives should be lost to suicide and we hope, together, we made an impact.  One of the themes is based on Hope and the importance of looking for alternatives to suicide.  We also want to promote the new help phone number of 988!”

“It was great to see all the cooperation on this project, both at Seward High, in the community and at Concordia University and we appreciated all the help.” commented Ayda Metschke, FCCLA member.  “There is a wealth of information on the topic and so many want to help and see this teen problem eliminated. With suicide rates increasing in almost every state, it is a very real issue and relevant to today’s students.  It is important to get the message out that there are alternatives to suicide.”

The girls hope to continue their message of hope and have placed much of the material in the SHS Guidance Counselor’s office and left the posters up in the hallway and on the bulletin boards in the school.  The FCCLA will host a booth at the approaching Seward Memorial Health Fair in the spring and a special Teen Suicide Awareness Program Oct. 19th at the Civic Center at 7:00 pm. The public is invited to attend.