Joseph Krause Named Youth Rotarian of the Month of May 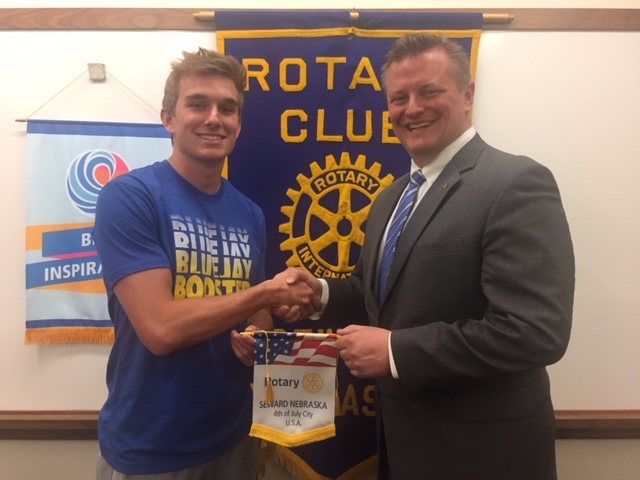 SHS Senior, Joseph Krause was named the May Youth Rotarian of the Month. He is the son of Jon and Jennifer Krause of Seward.  He was honored and recognized at the May 1 Seward Rotary Club luncheon meeting at the Jones Bank in Seward.  Fellowship and a brief business meeting preceded the introduction of Joseph. Joseph was introduced by Rotarian Matt Dominy and presented with mementos of Rotary, a Seward Rotary Club banner and a Rotary Club “Book Scholarship!”

Joseph is a scholar/athlete and a member and leader of the SHS National Honor Society, and has been on the SHS Honor Roll every semester of attendance.  His GPA is 3.98 and was named an Academic All-State for athletics all four years!

He is a member and longtime leader in the local Future Business Leaders of America (FBLA) currently serving as the local FBLA Chapter Vice President.  He participated in the local Seward VFW Voice of Democracy Speech contest and several activities involving the Education Division of the Nebraska State Fair.

In the summers Joseph is involved in Rouging with Eber Rouging-working in the area fields, and serves as a lifeguard at Seward’s Dowding Memorial Pool.

His volunteer efforts to fulfill the “Service Above Self” requirement is in his volunteer efforts working with younger athletes, serving as a coach for the 5th-6thGrade Rec Basketball program for two years and as a volunteer all four years for the area youth camps for football and basketball.  He also serves as a Junior Jay Mentor at Seward Elementary.

He has full football scholarship to Northwest Missouri State University with a goal to obtain a degree and profession in the area of business or finance.