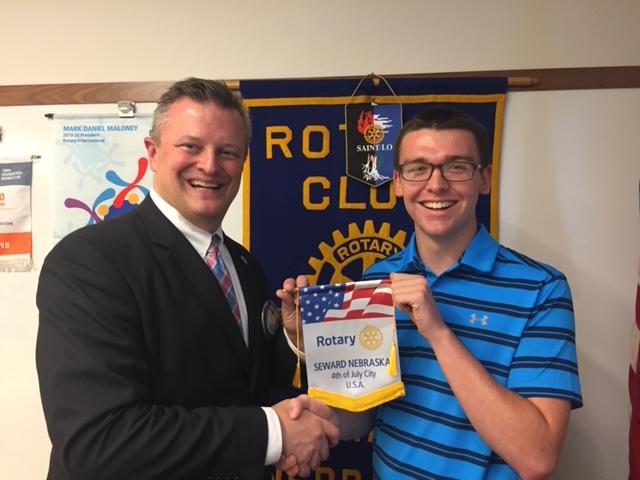 Cordell Vrbka, a Seward High Senior, was selected the October Youth Rotarian of the Month and recognized and honored at the recent Seward Rotary Club noon luncheon meeting on Wednesday, October 2, 2019 at the Jones Bank Auditorium.  Cordell is the son of Jake and Becky Vrbka of Malcolm.  He was introduced by Rotarian Matt Dominy of the Seward Rotary Youth Rotarian Committee and he presented a Rotary Club banner and information on Rotary and Rotary International.

While Cordell is very involved with a host of extracurricular activities at Seward High, he is first and foremost a scholar!  He is always on the SHS Academic Honor Roll and a longtime leader in the SHS National Honor Society. He is a leader at Seward High and as a sophomore, he was selected the Hugh O’ Brian (HOBY) representative, and is a HOBY Alumni.  He was also selected an Outdoor Education Counselor and was the SHS Boys State Representative for the Seward American Legion Club as a Junior.  He is one of the lead Student Ambassadors for Seward High and has participated many times in the SHS Quiz Bowl program.

Music has a priority in Cordell’s life and he is a leader and a longtime-four year member of the SHS Swing Choir-serving as Dance Captain, he is a member of the SHS Select Choir, he has been involved with the musical his entire high school career and participates in the annual Concordia University’s Summer Youth Choir.  Cordell was a member and leader of the SHS Marching Bluejay Band and the SHS Wind Ensemble for three years.  He has participated in a host of special choirs and honor band programs over the years as well as the SHS Pep Band!

Cordell has been a member of the SHS Track Team for two years of high school and participated in Cross Country for three years as a participant and one year as the student manager.

He has been involved as a leader in the SHS One Act program all four years and a leader with the SHS Speech team, participating in Humorous Prose, Entertaining Speech, Drama Team and Duet competitions.  Cordell participated in the VFW Voice of Democracy Speech Contest and Poetry Outloud as well.  His essay won the First Place award at the local Seward Optimist Essay Contest in 2018-2019 and the essay was selected to be read as at the state level.  He has been involved over the years in a host of activities at the Nebraska State Fair in the Education Division.

Cordell has been a longtime leader in the Seward High SkillsUSA program.  He was a local officer and elected a State SkillsUSA officer the last two years.  He was the state SkillsUSA News Reporter last year and is currently serving as the State SkillsUSA Vice-President.  He participated in various SkillsUSA contests on the State Level and was selected State Champion in Medical Assisting, and competed in Mousetrap contests and Opening and Closing Ceremony.  He medaled six times at State SkillsUSA conferences, participated in the National SkillsUSA program in the areas of Medical Assisting twice-placing 7th nationally last year and 5th place nationally this year.  He has been a state voting delegate for SkillsUSA and won the SkillsUSA Statesman award twice and won the SkillsUSA academic achievement pin three times.  He was recently named a SkillsUSA Distinguished Ambassador for Nebraska.

.Cordell is also very involved in the SHS FFA program and competes on a variety of levels at the District and State Contests. He serves as the FFA Treasurer and competes in Parliamentary Procedure, Livestock Management and Veterinary Science FFA Contests.   He is also a state Finalist and very involved in the SHS Future Business Leaders of America (FBLA) in the area of speech/public address, health care skills, business simulations, and business math.  He was also a leader in the Junior Achievement Stock Market Challenge for three years.  Cordell was also involved in the SHS FCCLA –Family Community Career Leaders of America.

Cordell is employed seasonally as an independent salesman for all the UNL Football games as a “hawker,” selling a variety of products to the guests and fans at the UNL Home football games.  He also was a longtime volunteer for the Lincoln Children’s Zoo during the summers since 2016-earning over 450 hours of community service!

Cordell is a member of the Pivot Community of Faith Church in Lincoln and a voice of the youth in their congregation.

He plans to attend the University of Nebraska and major in Pre-Veterinarian Studies and a Minor in Fisheries and Wildlife, with a long term goal of being an Exotic Animal Veterinarian.