Nathan Hochstein is the September Youth Rotarian of the Month 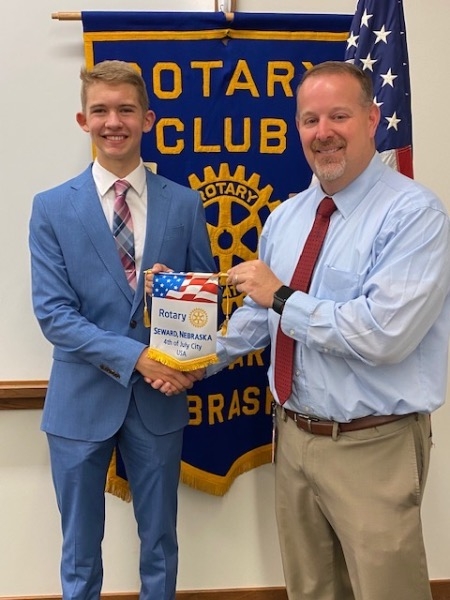 SHS Senior, Nathan Hochstein of Seward was honored as the September Youth Rotarian of the Month at the September 22, 2021 Rotary Club meeting at the Seward Jones Bank Auditorium.  He is the son of Glen and Pam Hochstein.  He was introduced by Rotarian Anita Foor and she share his interests, honors and accomplishments during his Seward High career.

Nathan is first and foremost a dedicated scholar at Seward High.  He is a longtime, loyal member and leader of the SHS National Honor Society, with his name on the SHS Honor Roll every semester of his high school career.  He has a GPA of 4.13 and is involved with the HAL (High Ability Learner) program at SHS.  His is involved with the Southeast Nebraska Career Academy Program and completed the Intro to Professional Education.  He achieved a 33 on the ACT test and is a Certified Microsoft Word Specialist.

Nathan is an athlete and very involved with the various athletic programs at Seward High.  He participated in the SHS Baseball program for three years and has made the move to Cross Country and Track and Field.  He is a leader in the current Cross Country Team, as well as being part of the SHS Track and Field team and competes in both the 800m and 1600m primarily.

His is an active member of the SHS Marching Bluejay Band and has been a section leader for the last two years.  He plays the alto saxophone and has lettered in Band.  He was also a member of the Symphonic Band for several years.

He is an active member and leader in the local SHS Future Business Leaders of America (FBLA) for the last three years.  His was selected by the SHS Administration to be a Bluejay Ambassador, giving tours to new students and assisting with various events.

He is a member of the SHS Speech Team and placed fourth at the District Speech Contest in the area of Entertaining Speech and fifth at Districts in the Drama Team (OID).   He was named First Runner-up in the local VFW Voice of Democracy Speech Contest and participated in the SHS “Poetry Outloud” Poetry Recitation program.     He is an involved member of the SHS Skills USA program and participated in the OCC (Opening and Closing Ceremony)-placing Second at State Skills and also competed at State Skills competition in the area of Related Technical Math.

His work experience includes working for the Sloup-Thorrel Detasseling in Seward-roguing and detasseling corn during June and July, pulling tassels from the corn stalks and removing the unusual stalks to control the quality.

Nathan’s hobbies and interests include jumping on his trampoline, playing spikeball and rock climbing.

His “Service Above Self” community service has involved a host of activities and totals almost 150 hours of volunteer hours.  He has often volunteered to help sell honey for the local “Honey Sunday” and been involved as a ticket salesman for many tourneys at SHS.  He has been a real volunteer at St. Vincent DePaul in various youth activities and activates for the children and helped out at the St. Gregory the Great Seminary as well.  He also served as an Outdoor Education counselor for the Seward Middle School (SMS) and been involved as a Math Tutor.

Nathan plans to attend the University of Nebraska in Lincoln and have a double major in Secondary Math Education and Business Administration or Spanish.