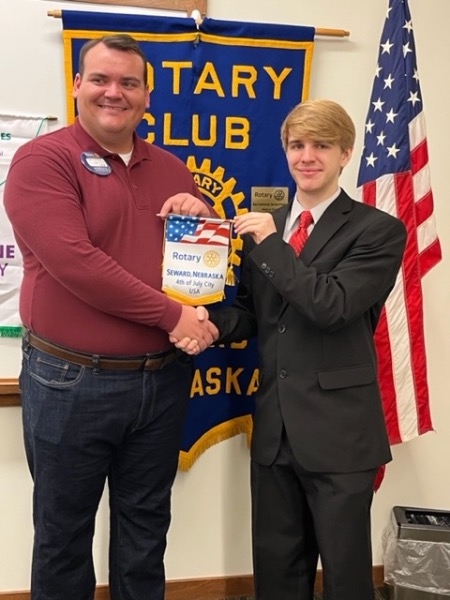 month of October, recognizing and honoring him at the October 12 th Rotary noon luncheon at the Jones

Bank Auditorium.  Noah was introduced by Seward Rotary member Anita Foor and thanked for his many

avenues of service. He is the son of Kevin and Deidra Fields of Seward.

Microsoft Office Specialist in PowerPoint, Excel and Word Certification and has taken many AP classes.

In fact, he achieved a perfect AP score on the Human Geography AP Exam!

Noah is in the High Ability Learner (HAL) program and received numerous P.R.I.D.E. nominations and

three P.R.I.D.E. Awards!  He was named third place in the District VFW “Voice of Democracy” Speech

Contest and placed first in the local GFWC and State GFWC Literature Contests over the years, placing at

the National GFWC level as well with his writing.

He has been recognized with 29 individual placements at the Nebraska State Fair Contests, in grammar,

was honored with the “Brad Fossberg Outstanding Performer” Award at the Nebraska State Fair in 2016.

earned three placements at the Future Business Leaders (FBLA) State Conference in 2021 as well.  He is

represented the youth as Sesquicentennial Sam during the Seward and Nebraska 150 th Anniversary.

Noah was a longtime leader in the Nebraska Civil Air Patrol, involved in the “Wreaths Across America”

Noah attends Hillcrest Evangelical Free Church in Seward and is on the Sunday Worship team. He also

Noah was employed with Houchen Bindery in Utica, NE this last summer and he has been employed by

College and study in the area of Conservation, Wildlife, Biology, and Ecology or Environmental Science,

depending on the college he selects.

Noah was presented with a packet of Seward and Rotary information, a Rotary Banner and will receive a

Award and Scholarship.  He will be recognized again at the spring “SHS Honors Night” in May.

Senior students at SHS can apply for the Youth Rotarian Award, as the club recognizes one Youth each

month of the school year.  Contact the SHS Counselor’s office for an application for the Youth Rotarian