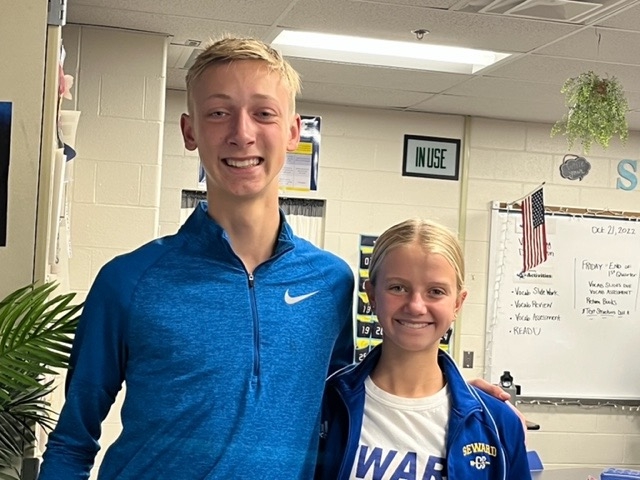 The annual selection process is complete to select a Seward High sophomore student leader for the Nebraska Hugh O” Brian Youth Leadership Seminar scheduled for this summer.  SHS Sophomore, Tessa Greisen, the daughter of Chris and Jody Greisen, was selected to represent Seward High. First alternate for the award is Esten Johnson, the son of Steven and Angela Johnson of Seward.  The seminar will be this summer, usually the first week-end in June.

Each student was asked to write about their leadership opportunities and ways they have demonstrated service to others.  Along with the written application, each student was personally interviewed by the selection panel.  The judges for the award were Anita Foor and Melanie Ayres for the Seward Rotary Club and Marv Taylor for the Seward Kiwanis, and Mary Meyer representing the GFWC in Seward. Clark Kolterman served as co-host for the project, along with Noelle Barker, SHS Counselor.

The finalists are all also invited to the SHS Sophomore Pilgrimage at the State Capitol in Lincoln in April of 2023, with a high school sponsor yet to be assigned.

The selected honoree from Seward will represent the high school in a week-end long youth leadership seminar involving one sophomore graduate from almost every high school in Nebraska.  The event is free for the student and funded locally.  Each delegate is to return to their high school and offer new leadership skills, achieved at the HOBY seminar.  Seward High has participated in the HOBY leadership program since HOBY’s inception in Nebraska.

Seven sophomore students from Seward High were selected thought written application and in the interview process to represent Seward High and the Community of Seward at the Spring 2023 State of Nebraska Sophomore Pilgrimage-sponsored by the GFWC Nebraska Federation of Women’s Clubs and locally by the School District of Seward and the GFWC Seward Woman’s Club and the GFWC Seward Junior Women’s Club.

The students selected include Kallie Zitek, Natalie Wintz, Ben Nottingham, Lawson Luebbe, Esten Johnson, Maya Hubach and Tessa Greisen.  The advisor for the honorees has not been appointed to date.

Judges for the selection were Anita Foor, Melanie Ayres, Marv Taylor and Mary Meyer-all of Seward.  The interviews were Wednesday, Oct 19th, 2022 at the Seward United Methodist Church with arrangements made by Greg Zabka.  Applications were coordinated by the SHS Counseling office and Ms. Noelle Baker.

In April of 2023 (date to be announced), the seven students will meet and tour the State Capitol, meet with the various elected officers of the state and be guests of the Nebraska Legislature.  They will enjoy lunch with their State Senator at the Governor’s Mansion and tour and meeting with officials of the Nebraska Supreme Court.

The annual event was canceled last year due to Covid.  This statewide program has been recognized nationally for “Excellence” by the General Federation of Women’s Clubs (GFWC) and serves as a model for many other states, who offer a similar, state educational program.