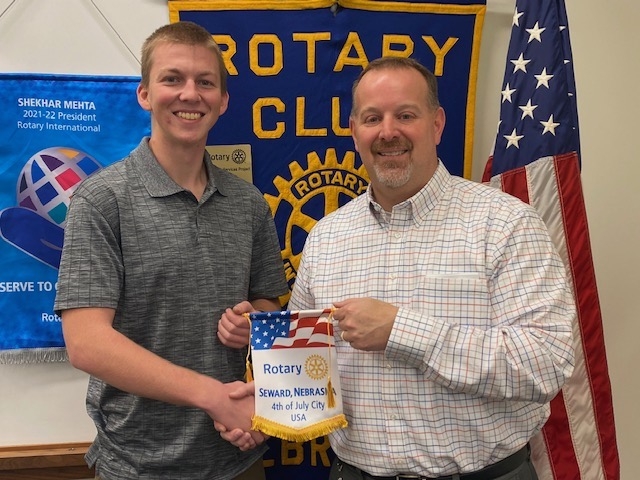 Seward High Senior, Ian Johnson of Seward, was selected the Youth Rotarian of the Month by the Seward Rotary Club at their weekly meeting on Wednesday, December 15th, 2021 at the Jones Bank in Seward.  He is the son of Dr. Jill and Brady Johnson of Seward.

Ian has several priorities at Seward High and one is academics.  He is on the SHS Honor many semesters of his high school career and has enjoyed numerous Advanced Placement (AP) and Dual Credit Classes while enrolled at Seward High.  His AP Classes include Human Geography, Computer Science, Biology, US History, Calculus and Environmental Science.   He has also earned numerous P.R.I.D.E. Awards, nominated by various teachers at Seward High.

Another priority is his involvement with music at SHS.  Ian has been involved in Show Choir since 2018 though this year. He has also been part of Select Choir, Mixed Choir and the SHS Musical for many years.  Ian participated in Vocal Performance this year as well.  He has been a member of the Marching Band, Pep Band and Symphonic Band since his Freshman Year and joined Wind Ensemble in 2019 and still part of the program today.  He plays the baritone and was selected a Marching Band Section Leader for 2021.

He also participated early on in high school in the quiz bowl program.

Athletics is also a priority for Ian.  He has been a member of the Track team since 2018, winning a varsity letter in 9th Grade and 11th Grade-participating in the 800m run.  He has been a leader in the SHS Cross Country program since 2019, and named a “Top Ten Member both in Grade 11 and Grade 12.  He also participated in the SHS Basketball and Football programs in 2018 and 2019.

His community involvement include his longtime 4-H membership.  His is a member and leader in 4-H and involved in a host of 4-H activities. His club is the H-4 4-H Club and he has mostly worked on refinishing projects on antique objects.

Ian was employed by the Windmill Pines from 2018 through the current year, Team Elite Roguing / Detasseling in 2019 and Hayek Poured Walls in 2021.  Ian also has a Mowing and Snow Blowing Service from 2013 through today.

In the area of “Service Above Self” Ian has served many in the community.  For the last eight years he has been involved in the annual Fairgrounds Clean up prior to the County Fair and the Blue Valley Adopt –a-Family Project.  He has been involved with the Seward County Adopt a Cemetery for six years and Operation Christmas Child for the last four years.  He is a longtime volunteer for the Rotary Club Stuff the Cruiser and other Christmas volunteer efforts.  He has been a longtime volunteer at St. John Lutheran Church and School and co-leader for many years at the St. John Vacation Bible School (VBS) program.

Ian plans to attend Concordia University in Seward and study in the area of Chemistry.  His hobbies include reading, running, and recently learned to play the mandolin, which he has enjoyed.

The Seward Rotary Club recognizes one outstanding SHS Senior each month.  Applications can be obtained by contacting the SHS Counseling office.